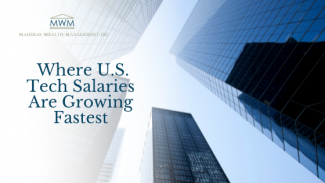 The latest Dice Tech Salary report is based on a survey of 9,000 employed technologists across the United States and it provides an insight into the development of salaries in tech sector. Despite the Covid-19 pandemic resulting in significant changes, the traditional principles driving salary growth have remained in place. The skills and services offered by technologists continued to be in high demand throughout the crisis with companies requiring everything from digital transformation to heightened viligance against cybercrime. Despite many companies tightening their budgets, the average U.S. tech salary climbed 3.6 percent between 2019 and 2020, reaching $97,859.

Coupled with low levels of tech unemployment generally, that led to competition for talent which drove the salary increase. While this was evident in many established tech hubs such as the Bay Area, it was also seen in emerging areas. Charlotte in North Carolina, one developing hub, saw its average tech salary climb 13.8 percent, the highest level of growth seen in the Dice analysis. Orlando in Florida came a close second with 13.4 percent growth while New York City rounded off the top three with 11.6 percent.

All information is believed to be from reliable sources; however LPL Financial makes no representation as to its completeness or accuracy.

This article was prepared by Financial Media Exchange, LLC.